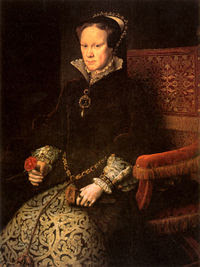 OK, here is the deal, I feel committed to finishing this series because I promised my readers that I would. I do this because I LOVE my readers (all three of you, who really only come here to read Sarah's Blog, but I digress). However, I don't really want to because there is so much information out there about my two remaining profiles (Mary and Elizabeth, both daughters of my favorite Renaissance Pig) that I think it is rather unnecessary. So, I have decided to just throw out a few things about Mary that I think are interesting as "ticklers". If you are interested in what you read, you can either ask follow-up questions, Google her, check wikipedia, or borrow a few books from the library to learn more. Look at this entry as a "commercial". Isn't this exciting?

A little background: As you probably remember from my entry on Katherine of Aragon, she and Henry had a little Princess named Mary. She had a charming life in the beginning, but was later cast away and declared illegitimate by her step mommy Anne Bolyne who forced her to wait on her step sister Elizabeth (come to think of it, it was a LOT like the story of Cinderella). Anyway, eventually Henry died and left three children from three women, 2 girls and a boy. Edward (the son) was made king but he was only 9 so his uncle Lord Seymore and later John Dudly (father of Robert Dudly, Elizabeth's long time fling). Anyway, Edward died, there was an attempt to declare Lady Jane Grey Queen, the people rebelled and soon Mary took her rightful place as Queen of England (and both John Dudly and Lady Jane Grey were beheaded).

1) Both Mary and her brother Edward are said to have contracted Syphilis from their Dear Daddy, and therefore where quite sickly throughout their lives.

2) Mary was so desperate to have an heir to secure the Catholic Future of England (and hold on to her husband Prince Philip of Spain who was repelled by her) that she had 2 hysterical pregnancies. She stopped having periods, her stomach grew, and she was NEVER pregnant. Now, I call that "eating over the holidays", but this was quite scandals. The entire country was waiting for a Prince and it just "never came".

3) In an effort to bring the country that she loved back under the control of the Pope, Mary had 283 individuals burnt at the stake, during her 5 years as Queen. It is said that the entire city of London smelled like burning flesh.

4) A Bloody Mary is made with Tomato Juice and Vodka, then garnished with a celery stick.

5) There is a children's game in which they look in the mirror and say "bloody Mary" three times. If said in sequence, the ghost of Mary Tudor appears in the mirror. The children's game was parodied in the South Park episode "Hell on Earth 2006," where the ghost of Biggie Smalls would appear after saying his name three times in a mirror.
Posted by Pennyfeather at 6:27 PM

I now feel that I can return to London and understand what I am seeing. The last time the only thing that I understood was the vault at the Hard Rock. Now I am an educated person. Thank you.

You are welcome. Is there anything you would like to know before leaving for Italy?