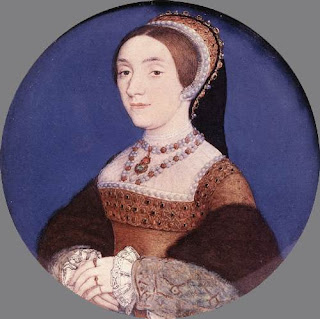 Kathryn Howard was not particularly beautiful, intelligent or well schooled. She was the daughter of Lord Edmund Howard, a younger, looser brother of Thomas Howard, Duke of Norfolk. She was the also first cousin to Anne Bolyne, and like Anne, died on a scaffold in Tower Green.

Raised in a family with too many children she was sent by her Aristocrat father to live with her Grandmother. There she specialized in flirting and giggling. Because of her family name, Kathryn was able to join the Court at about the age of 19 as a lady in waiting to Anne of Cleves (no one knows how old she was for certain because her parents had too many kids to write it down). Henry immediately became smitten with the little twit, and sixteen days after being freed of Anne, he took Kathryn Howard as his 5th wife.

Henry was 49 and his bride was no older than 19. Henry had also gained a large amount of weight and was dealing with the ulcerated leg that was to pain him until his death. He also by all accounts had horrible BO. To say the least, the young Ms. Howard did not find him very, ummmm, appealing. She did, however, find plenty of handsome, younger gentlemen to keep her warm a night.

Less than a year into Kathryn's marriage, the rumors of her infidelity began. It also come to light that Ms. Howard had premarital sex with 2 suitors prior to her marriage to the King (upon learning this Henry passed a law that premarital relations before marrying a king was treason). Kathryn didn't help matters much by appointing one of her admirers as her personal secretary.
Enough evidence was gathered that the Queen had been promiscuous before her marriage and may have had liaisons after becoming Henry's wife. She was executed on the Tower Green on February 13, 1542 and laid to rest near Anne Boleyn in the Chapel of St. Peter ad Vincula at the Tower of London.
Kathryn was married to Henry less then two years, had no political influence, never had a child, and was remarkably insignificant to the history of England. She also died at 20 after Henry refused to annul the marriage and banish her from England, which was an option. I believe that the moral of this story is not to marry the king unless you plan to be a saint.
Turn in next time for a fascinating discussion on Henrys 6th and final wife, Katherine Parr. Happy Valentines Day!
Posted by Pennyfeather at 8:14 AM