One Small Step for Mankind, One GIANT Step for Ms. Bean (and me) 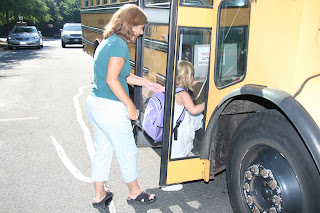 We have been talking about today for an entire year! It has been the topic of MANY late evening discussions, contingency planning sessions, and sleepless nights. You guessed it, today was our first day of kindergarten.

The City of Alexandria has a wonderful program where they take upcoming Kindergartners and send them to "kindergarten camp" for 2-weeks in August, affording them the opportunity to find their way around the school and get comfortable with their new "status in society".

So, at 0900 today Susie, Papa, baby-bee and I, were standing in front of Susie and Papa's house (door to door transportation is another perk of kindergarten camp), waiting for the big yellow bus to remove our baby from our home and turn her into a teenager. I don't know who who was more nervous, Ms. Bean or myself, but we were equally tired because neither of us slept last night! Ms. Bean described the butterflies in her tummy and asked for the 99th time how the bus driver will find her house in the afternoon. I did consider calling the whole thing off a few times, and putting off Kindergarten until she turns 9, but Tom probably would have said "no". So, at about 0910 the bus arrived (late), and Ms. Bean climbed on with her purple back pack, and took her seat. For the rest of my life, the picture of her little legs taking her up the bus steps will be permanently etched in my memory (probably sandwiched between the look on her face the first time she held her sister and her wedding day).

I followed the bus to school (shedding a few tears and running 1 stop sign) parked and RAN to the bus so that I could be there by the time that she got off, in case she needed me, she didn't. She gave them her name and got into her line, stopping for a few seconds so that I could cover her in sunscreen. Then she turned around and blew me a kiss, telling me that she would "see me at 3:00 when the bus dropped her off". Ms. Bean and the purple backpack walked into the school with her new friends. The principle told me that it had been a good morning, only 1 crying kid and 3 crying parents. I took that at me "cue" to leave.

So, Ms. Bean found her way home, and already has 2 new friends (a girl named Caitie and the lady in the cafeteria who asked if she could have Ms. Beans dress). I still have butterflies.
Posted by Pennyfeather at 6:26 PM

And the butterflies will continue to flutter for the rest of your life. It's a happy dance! Susie

I have different butterflies for next Saturday.

Folks in India and China are training their kids much faster. We need to get our youngsters learning a little faster also to compete. Absolutely no reason to wait for college to learn about the derivative or integrals. History? English? Sociology? Humanities? To heck with that.

Math, biology, genetics, economics, language, a touch of psych, karate, and a good kick in the pants. That's what will produce future world leaders.